The Minute Book of the 1st Woodnewton and Apethorpe Scout Toop has become available, and below is the history of the short life of this Troop.

In 1961 there were obviously sufficient boys of the right age in the village and Apethorpe who were interested in joining a scout group.

So, on Tuesday, 7th February a group of parents who were interested got together at the vicarage to discuss the formation of a scout group in the village.  Six parents, (Messrs Sharpe, Chambers, Hollowell, Spademan, George and Benfield) and the vicar, Revd Basil Turner were present.   It was agreed that these parents become the committee, with Mr Sharpe as  Chairman and Mrs Benfield  to act as Secretary and Treasurer.  The vicar agreed to act as scout master.

Several important issues were discussed, the main one being how the Troop was to be funded.  A weekly subscription of 6d per week per scout was agreed.  It was thought that a letter to the villagers asking for a donation might be the best way forward and this was to be put into action immediately.  The vicar stated that it was also important that the scouts themselves should work to raise funds too. 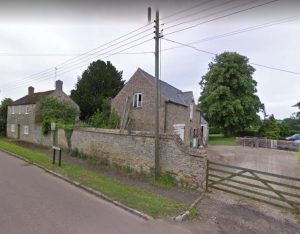 The vicar offered the loft of the Coach House building at the front east side of the vicarage garden as  headquarters for the boys. However, it would have to be cleaned out and decorated plus electric power for lighting needed to be installed.

The scouts would need a uniform and it was agreed that they should kit themselves out with khaki shirts and shorts and green berets.  The colour of the neckerchief to be decided by the scouts when they meet.

The group would also need some equipment so the vicar suggested that if they highlight the formation of the new Village Troop in the newspapers, this might produce free offers of goods or some for purchase at a reasonable price.

By the time the committee met again in March, donations had been received and amounted to £31.16s.0d.  The headquarters had been brought into a useable condition by the boys from St John’s School, Apethorpe, and Mr. Sewter (Electrician) had installed the necessary wiring.  The boys had worked for free but materials had to be paid for.  It was also suggested that a gift of 200 cigarettes be made for the boys.  Offers had been received from Oundle School for the loan of camping equipment and St John’s School had also offered the use of equipment on a time to time basis.

Mrs. Benfield recorded that a post office savings account had been set up for funds.  She also reported that she had purchased the dark green material for the neckerchiefs.

As most of the donation money had been spent on necessities, the committee agreed that a fund raising event had to be planned. A bingo session in the British Legion Hut at Woodnewton was arranged for 12th May.

The boys attended their first 3-day camp in June and a week later 9 boys were invested as full members and the vicar received his warrant as scoutmaster. The vicar thanked the committee for what they had achieved over the last 4 months in getting the boys to their first camp in such a short time. By the end of the year several more boys had joined the group including ones from Fotheringhay and Southwick villages.

The first Annual General Meeting was held on Monday 5th February, and the following people were elected as officers of the committee: Mr. Chambers – Chairman, Basil Turner – Vice Chairman and Mr. K Harris as Secretary/Treasurer.  Messrs Hollowell and Spademan, Mrs George and Fitzjohn were elected onto the committee, and this group of people appear to have run the group for the next six years.

It is recorded that each year the scouts would take part in ‘Bob a Job’ week and also attended week long summer camps in July or August; sometimes nearby at Pilton, Pipwell, Wadenhoe, or further afield at Snowdon, Chalfont Heights or Norfolk County Campsite.  Several extra people from the village had to be brought in to help with these camps and in 1962 Mr. Lilliman, a Master from Oundle School, also helped.  In later years, it would appear that the 1st Woodnewton and Apethorpe Scouts joined the Oundle Scout Group on their summer camp venues, as they were lacking offers of adult help.

Fund raising events continued over the years as obviously more and more equipment was needed for these camps and extra furnishings for the headquarters.  It was recorded in 1963 that 16 new chairs and a new oil heater had been purchased for the den.  Events such as Bingo sessions, whist drives, concerts and dances were arranged within all four villagers to bring in much needed monies.

In March 1968, Mr. M Charney, the District Commissioner gave a very interesting talk on the reorganisation of scouting, and the last recorded minutes of a meeting held on 29th November, showed that it was proposed by the Chairman, Mr Chambers, that the Woodnewton Scout Troop cease to exist.  Mr Charney, was in attendance and proposed a vote of thanks to all members of the Scout Committee for their help in the past, especially Mr Turner.  Research is still in hand as to why this Troop finished.

The committee agreed that all the equipment and the Troop funds be given to the Rural District Troop.

Memories from Terrence Hollowell, a scout who joined in 1961:

“I remember the Reverend Basil Turner starting the Scout Troop and it included boys from Woodnewton, Apethorpe, Southwick and Fotheringhay.   We met once a week in the two-roomed loft in the building opposite the old vicarage.

The names of scouts I remember were: Brian and Edward Hollowell, Masters Moisey, Chambers, Watkins and Spademan from Woodnewton. The brothers McNally from Apethorpe, Master Harrison, brothers Holdis and brothers Masey from Southwick, and brothers Fitzjohn from Fotheringhay.

We were split into three troops – The Falcons, the Kestrels and the Peewits.  We used to compete for points for our troop.  We were taught how to tie knots, splice ropes, light fires, build rope bridges across the brook, and how to put up a tent and dig latrines.

I remember going on three camps: the first on the little island opposite Halefield Farm (between Woodnewton and Southwick ), the second camp was at Pilton near Wadenhoe and the third one at Pipewell on the Pipewell Hall Estate near Corby.