Conrad was born on 15th March 1891 in Woodnewton and was baptized on 7th June 1891 in St Mary’s Church. He was the only son, with an older and younger sister, of Annie Elisabeth Cottishaw and Thomas Wells, a Harness Maker who came to Woodnewton from Glinton near Peterborough.
Thomas Wells died on 18th March 1933 and left the business to his wife Annie. 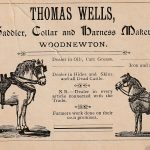 Conrad started school on 25th June 1894 and left on 24th February 1906 to start work as an Apprentice in his father’s Saddlery and Harness business situated on the north side of Main Street between the White Swan and the Horse and Jockey.

In the 1911 Census Conrad is also listed as a Harness Maker in his father’s business. Conrad’s Grandfather and great Grandfather were also Harness Makers and Saddlers, making him the fourth generation to carry on the skill.

Conrad fought in the First World War as a Corporal in the Machine Gun Corps Cavalry of Northamptonshire Yeomanry. He spent 4 and a half years as an Army Saddler making and repairing the leather-work for the horses. He was awarded the British War Medal and Victory Medal. He returned to Woodnewton and is listed on the Electoral Roll for 1918.

On the 6th November 1917 Conrad married Constance Ivy Johnson in St Mary’s Parish Church, Woodnewton. Constance was the daughter of the late Robert and Florence Johnson who lived at Dairy Farm in the village on the south side of Main Street towards Oundle. Before her marriage Constance was living and working in Stamford as an Apprentice Dressmaker for Oakes and Musson. They had a son named Robert Thomas and a daughter named Hilda Margaret. 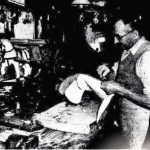 had to diversify the business and began making saddles and reins for children’s ponies, heavy belts for machinery and handbags. He also made ‘nubs’ which are the leather straps which display the beautiful horse brasses which used to adorn the heavy horses.

After Constance died in 1973 Conrad went to live with his daughter and her family in Spratton, Northants.

He sold his house and buildings to Stanley Russell who in turn sold to Robert Bellairs a Grain Merchant in the late 1970s. 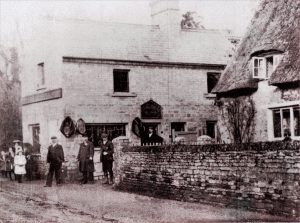