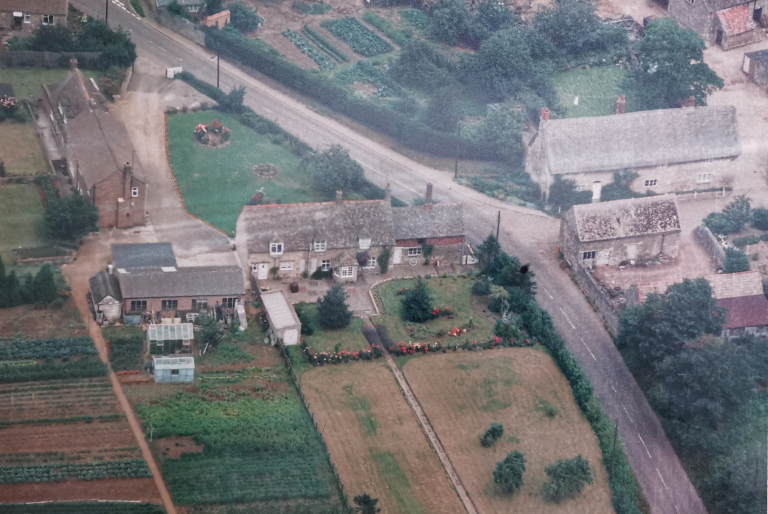 Meadow View is a 17th Century cottage located at the east end of the village on what is now called Oundle Road. It would have been the first property that a traveller would have reached after crossing the Willow Brook. The garden (market garden) of the property would have reached down to the Willow Brook before Bridge Cottage was built in the 1960s. There is evidence of a pigsty in the southern part of the garden. The land here is raised 2-3m above the road, with the road being a “hollow way” – where the thoroughfare or track is significantly lower than the land on either side.  Over the centuries traffic from and to Oundle or Fotheringhay would have been forced to cross the Willow Brook at the shallow ford (later replaced by the bridge in 1735), then heading directly north slightly uphill into the village. This traffic would have eroded the land thus creating the hollow way we see today. To create a level foundation the ground surrounding the property is set at about 1 m lower than the land on the south, western and northern sides.

The central part of the cottage is the earliest, comprising of two rooms, with an inglenook hearth in the west room. A salt safecan be found next to the hearth. In the eastern room a recess shows where the steps up to the upper storey (attics) would have been located. In the 17th Century a bakehouse was added to the eastern end of the property, making it one of two bakeries in the village. The present occupants removed the oven in 2013 and joined the two eastern rooms together, but took photos of the bakehouse before it was removed. 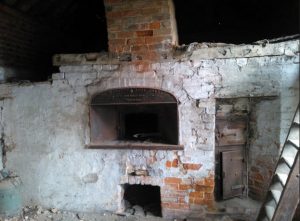 The cottage is listed in An Inventory of the Historical Monuments in the County of Northamptonshire, Volume 6, Architectural Monuments in North Northamptonshire. The stairs were restored in the 2013 renovation to where they would have been originally as indicated by the recess in the north wall (the 1974 rebuild moved them to the west of the house).

The present western-most structure was built in 1974, but the doorway on the upper floor to these rooms is only 5.5ft high, suggesting that it replaced an existing structure.

Due to the usage of the property as a bakehouse and its proximity to the Hare and Hounds public house (now Willowbrook Farmhouse), we can trace back all previous occupants through the census records to 1841.

See below for more detailed report  on the Winsall family.

Richard Carley takes over the bakery.

Richard Carley and wife do not have any offspring but have a lodger, Samuel Hunt, who is the schoolmaster.

Richard Carley loses his wife in 1888 but is still a baker at 73 years old:

The Jacksons take over the bakery.  Their son, William Jackson is killed in WW1:

The 1921 Census record is not presently available but we know from the 1939 Register that Harvey Fitzjohn became the owner of Meadow View next, followed by the Allen family in the 1970s.

There is a possible further link back in time with an article appearing in Country News – Domestic Occurrences in Aug. 1804, with the name King (seen in the 1841 census) appearing once more:

The house of widow King, baker, at Wood Newton, in Northamptonshire, was discovered to be on fire. As the premises are located in the middle of the village, considerable alarm was excited for the safety of the town; but through the steady assistance afforded by an engine from Lord Westmoreland’s the fire was extinguished with the loss of the premises where it first appeared. As the conflagration commenced in the house and an adjoining stable at the same time, it is thought to have been occasioned by lightning.

Laban Winsall was born  in 1826 in Nassington.  From the information found in the 1841 census he was an apprentice to John King at the age of 15 years at the bakehouse at the east end of the village – the property now known as Meadow View.

Between 1841 and 1851 Laban married Louisa Hale and took over the bakery.  In the 1851 census they are recorded as having a son, George and a daughter Elizabeth.  The Winsall family appear to be of reasonable means as they were able to afford a servant.  At this time they also had an apprentice, Alfred Hale, Louisa’s brother in law. The previous baker, John King, is still alive in another 1851 census record but is recorded as a “former baker – pauper”.

In March of the same year, 1851, there was an article in the Northamptonshire Mercury detailing how Laban’s horse was stolen by another brother-in-law, James Hale:

“James Hale was charged with stealing a horse. Value £20, the property of Laban Winsall.

Sir Eardlry Wilmot was for the prosecution.

Laban Winsall is a baker at Woodnewton. Prisoner is brother to his wife, and his mother was staying at his house. On Friday night the 3rd of Januar,  prisoner left his house, on the recommendation that he should stop that night at Mr. Bullimore’s.  On Saturday night, prosecutor locked his horse up in his stable, and next morning he found that his stable door had been broken open and his horse stolen.  He borrowed a horse of a neighbour, and tracked his horse to Grantham, 35 miles off, on Sunday morning, by his footmarks, he having “a wonderful round foot.”  At Grantham he found his horse at the Blue Bell, and afterwards saw the prisoner before the magistrates.

Joseph Kendall, is an ostler at the Blue Bell, Grantham.  On Sunday morning the 5th of January, about nine o’clock, Prisoner brought a bay horse there, with a white face, and three whitelegs. He asked witness to make it comfortable till Monday morning.  About 11 o’clock he returned with two men, one of whom asked him if he should have any objection to sell it.  He said he should not.  In the course of the afternoon, Lilly, the Grantham constable came, and then the prosecutor.

Prisoner said nothing in his defence. and the jury found him Guilty.  Prisoner then stated that as he was on his way to Grantham late on Saturday night, he was overtaken by two men with the horse. He owned the horse, and the men said they had made a rap with Laban Winsall for it. They offered to sell it for £9; and he bought it off them for £8.

His Lordship asked prisoner why he did not make this statement before.  Prisoner said he did not understand his Lordship’s question.  His Lordship recalled Laban Winsall, who stated that he and prisoner were not upon good terms: if he married his sister, he did not marry the whole family. His Lordship said that was no reason why brothers-in-law should not be on good terms. He asked the jury whether the prisoner’s story made any difference in their verdict. They said it did not.

His Lordship sentenced him to Twelve Months’ Imprisonment”

Louisa passed away in March 1861 at the young age of 39 years, and Laban had a new apprentice and housekeeper.  Laban died in February 1866, aged only 44 years. Laban appears to have been prepared for his death as he set out his Will the previous summer, requesting that his estate be held in trust by Robert Landin and William Strickson for his children George and Elizabeth.  Laban is buried in St Mary’s churchyard next to his wife Louisa. 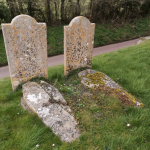