In 1919 the ownership of a field known as Sand Holes, located to the north of Orchard Lane (then called Back Lane) was transferred, subject to conditions on its present and future use, from Henry Leonard Campbell Brassey of Apethorpe Hall to the Woodnewton Parish Council.  The field comprised 5.96acres and its use at the time was stated as being allotment ground.  This indicates that the field was being used as allotments while still in the ownership of Lord Brassey – possibly to help on the “home front” during the First World War.  As the name of the field suggests, there was a large disused sand pit on site located where the children’s playground is currently situated. 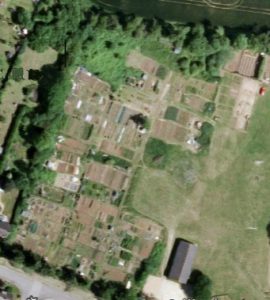 In November 1919, the Parish Council approved the terms of the conveyance of the land and the Parish Clerk offered to do the work of letting the plots and collecting the rents on behalf of the Council.  He asked for an increase in salary of £2/10s/0d (£2-50p) per annum to do this additional work but the Parish Council did not accept this offer and decided to undertake the work itself.  In December 1919 however, the Council changed its mind and approved an increase in the Clerk’s salary of £2/10s/0d pa.  The rents were also set at that time at 5/- (25p) pa for an allotment and 2/6p (12.5p) pa for a pig sty.  These rents were to be paid in advance each year on the first Monday in February (paid at the School Room) and non-payment at that date would render the allotment vacant.  No allotment could be sub-let, and all had to be kept in a state of cultivation acceptable to the Council.

The possible existing use of the land as allotments prior to the sale together with the building of new houses in the village by Lord Brassey in New Road (now called St Mary’s Hill) may have prompted the sale of the land to the Parish Council.  Further research needs to be undertaken by the History Group into the early history of the allotment site and the relationship between Lord Brassey, the occupants of the new houses in New Road and the take-up of the allotment tenancies.  It is known for example that the occupants of the new houses in New Road had the first option for renting the pig sties.

A few interesting facts have been uncovered about how the site has developed over the past 100 years;  in 1930 the Council received a report on the bad state of the fencing around the site, while in 1932 there were concerns about rubbish being dumped on certain allotment plots.  A year later 5 plots had their rents reduced from 5/- to 3/- pa.  No doubt the years of the Second World War saw increased horticultural activity on the site, but by 1947 the state of the fencing was once again raised at a meeting of the Parish Council.

In 1961 the Council considered providing a water supply to the plots, but this was turned down because it would have required a considerable increase in rents from the plot-holders to pay for its installation.  Water was not in fact supplied to the site until the mid-1980s when two taps were installed.  A further two taps were put in more recently. In 1966 damage to the fencing was again reported.  However, in February 1967 all the allotment plots were let at 6s/6d pa each and there were 5 fowl runs at 2s/6d pa each.  Of interest here is the 1s/6d (7.5p) pa increase in rent over the 48 years since 1919 and the lack of any mention of the pig sties as a source of income.

The pig sties had fallen out of use and into disrepair over the years and by 1980 they were dangerous and children from the village were often seen climbing over the crumbling structures.  In 1980/1981 a project was undertaken to demolish the sties using, as labourers, boys from the Approved School at Apethorpe Hall.  The site of the sties can still be seen, however, as a concrete strip running between plots 20 and 21. Even though there were no pigs on site, there is mention of a plot-holder being allowed to keep a goat in the mid-1980s, but he was a Parish Councillor so perhaps it’s best to move on quickly!

Not all of Sand Holes has been used for allotments as they are known today and in 1970/71 the Parish Council approached the then Lord Brassey seeking permission to vary the terms of the 1919 sale agreement to allow the relocation of the playing field from Lindsey Field (now Lindsey Close) to the unused part of the field.  Later still the children’s playground was developed on site, and later still in 1991 the Village Hall was built.

Research has identified several village “characters” and their sometimes dubious activities on the allotment site.  The lack of space prevents telling their stories here and now.  As more information is collected these stories may be made available in a separate article together with those of the present day “characters” that undoubtedly exist.

1st December 1919:  the following rules were passed by the council in the usual way for the new allotments

18 April 1930: Mr Wells brought it to the attention of the meeting of the bad estate of the allotment fence.

15 Feb 1932: the question was raised respecting rubbish dumping on the allotments.  Adjourned for investigation.

23 Mar 1948: the necessary repairs have been completed as per Mr Berridge’s estimate.

16 Oct 1961: water supply to allotments discussed and turned down as it would necessitate a considerable increase to rents.

17th Feb 1984: there is to be a meeting of allotment holders at 7.30pm prior to the next PC meeting.  Each allotment holder will be invited personally by letter and it is hoped the response will be good.   To date the allotment account stands at £218, no other money will be available this year.   The cost of supplying water to the allotments is £313 (to date) and at the current rate of income from rents will will take three to four years.  It must be decided to either add money or raise rents if the scheme is to go ahead.  The PC will not control a metered water supply.

18 May 1984: Allotment Act 1950:  a letter was received from Mr M Jones requesting permission to keep a goat and to erect a shelter to house it, at the allotments.   In view of the fact that Mr Jones is a Parish Councillor he retired from the meeting.  His request was then considered and proposed by Mrs Platt, chairman, that permission be given, seconded by Mrs Butcher.  “All in favour” –   Mr Jones to be notified accordingly.

21 Sept 1984: Anglian Water Authority have installed water at the allotments.