The Methodist revival began with a group of men, including John Wesley (1703–1791) and his younger brother Charles (1707–1788), as a movement within the Church of England in the 18th century.

The Methodist Chapel in Main Street, was built in 1840, licensed in July and opened on 14 October of that year.  It is a rectangular building with a three-bay ga 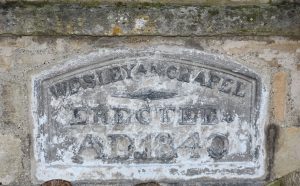 bled front elevation.  The walls are of coursed rubble with roof of slate and dressings of freestone and brick.  Later in the 19th century the front windows were altered, the rear gable wall was rebuilt, and the interior refitted.  Reset in the North wall is a stone slab inscribed ‘WESLEYAN, CHAPEL ERECTED AD. 1840’.

The Chapel played its part in World War 2.  The names of evacuees are recorded in the village school admissions book. They arrived by coach in September 1940 where they assembled in the Chapel School room.  The WVS and others helped to place them with people who had offered to home them.

In the past 50 years the Chapel has gone through a variety of stages but in the 1960’s was still an active place of worship.  Sunday evening worship was held there regularly throughout the year.  Being a simple rectangular building the heating in the winter was provided by means of a pot bellied stove in the aisle. (not the one there now).  To keep the heat circulating it would be vigorously raked during robust singing of a hymn.

One event in the 1970’s involved Coco the Clown and Moma Coco (his Wife Valentina) putting on a film show for the village. Coco had a projector and screen and his favourite film was one with the Marx Brothers.  The film was room with all the seats taken.  The film was about half way through when Coco’s assistant noticed that the film was not winding onto the rear spool as it should have been, but was spilling onto the floor in a heap.  After a slight panic the film was stopped and the film fed onto the rear spool by hand.  While this was going on the audience was catching up on the local gossip with Moma Coco giving out ice creams.

During the 1980’s saw the building being used for a number of activities; a group of touring players put on a number of performances there which were well attended, Parish Council meetings took place in the Chapel school room at the rear of the building and the last PCC meeting to be held there was on Friday, 16th September 1988.

As the congregation steadily declined, it was decided to cease services there and to sell the building.  The Chapel was put up for auction in 1989 and purchased by a potter, Rob Bibby.  It opened as a Craft Studio in 1991 with Rob, Wood Carver (Glyn Mould), and a Puppet maker and showman (Ken Barnard). In the early stages there were other crafts, Gilder (Anne Swarsbrick), Stencilling (Sarah Coups) and Leatherwork (Les Theedom). Since then it has developed into a busy Mini Arts Centre; the main activity being the pottery together with regular art classes.