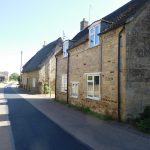 the Horse and Jockey on the north side.

We know from the ‘Inventory of the Historical Monuments of Northamptonshire’, which was published in 1984, that the classification of this cottage was a 4a.  This meant that it was originally built as a two-room plan with the gable wall housing the chimney stack with a single hearth.  The front door would have been on the long wall and lead into the main room.    Just over one-third of all houses in this area were originally built to this plan.  The book also states that it was built in the early 19th century.  However, following our research, and with the help of the current property owner, we have been able to ascertain that the house was built sometime during the 1700’s.  The attached house, number 31 Main Street, was built at a later date, and appears to be built into part of the west gable wall of Montrose Cottage.

We can see from the Tithe Map of 1778 that the properties on the south side of the then Town Street lay in strips down to the Willow Brook.  This cottage (number 69), under the ownership of the Earl of Westmorland, was tenanted to Thomas Franey (from the Tithe Map Log Book) at that time, but we know that during the earlier part of the 20th century the lower part of the land was sold off to a neighbour.

A framed manuscript owned by the present occupier provides us with the tenants and customary tenants of the 17th and 18th centuries:  John Desborough and William Norman, William Barron and Alice Ferry, Edmund and Elizabeth King, and William Franey.

The census shows us that a widower, by the name of John Gaudern, was the occupier of the property in 1901.

Information prior to 1940 has only come from records, but we have actual comments from somebody who was born in the property in 1943.  Robert Bellairs, who is still a Woodnewton resident, has been able to supply us with information for the period that he lived in the cottage.

“My parents, Reuben Bellairs and Kathleen Black were married in 1940 and moved into Montrose Cottage immediately after their wedding.  The cottage had electricity but no running water. Water was obtained from a well down the garden.  Also down the garden was the toilet, which was emptied every Wednesday when the soil cart came.   If the toilet was full prior to the cart arriving on a Wednesday, a hole had to be dug in the garden.

On the south side of the cottage was a lean-to building which housed the scullery/kitchen; this had a sloping tin roof.  My brother and I used to climb out of our bedroom window and sit on that roof in the summer time, when we should have been in bed!

At this time the front door was still in the north facing wall onto the road. We left the cottage in 1951 when the new houses were built in Sycamore Close.”

Mr Wilfred Gynn, who lived at Hill Tree, a cottage opposite the village green on the corner of Oundle Road and Sycamore Close, bought this property for his son and family around 1965, who lived in it for several years.  The Bartlett family moved there for a couple of years in 1970.

We know from a Planning Application made in 1972 by the then owner, Mr Cummings, that the property was known as Allandale at the time, and obviously for several years before as the 1952 Electoral Roll also refers to it by that name too.  These plans also show us that a front wall, gate and posts were removed from the gap between this cottage and the one to the east, Spinney Farm Cottage, to make a vehicular access to the new garage that was being built in the back garden. The front door must have been blocked up during this time as when the present occupier bought the property in 1977, there was no front door.

Since 1977 the lean-to building has been converted into a conservatory, and this is still in position today.