The Hare and Hounds (now known as Willowbrook Farmhouse) was built circa 17th Century, and records show that it became a public house in 1805, under the licence of John Goodyer.  We assume that John was born in Woodnewton, as we have found a Baptism record for a John Goodyer on 26 January 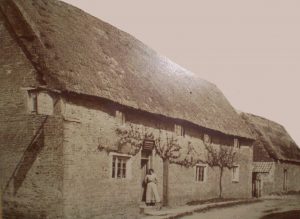 1749. The Goodyer’s were also listed in the Tithe records of 1778, so we know that several generations of this family must have lived here.  John, who died in 1826, is buried in the churchyard alongside many family members.

John Hill is listed as the next victualler, between 1828 and 1861, however, the 1841 census still shows Mary Goodyer living at the Hare & Hounds, as she didn’t die until the following year aged 84 years. Further research shows that John Hill, who was from Polebrooke, married Elizabeth Goodyer and that is why they are all shown as living at the Hare and Hounds.  Upon John Hill’s death in 1861, a Juno Paine would be the next licensee for twenty years.  After that a Thomas Royale and Lot Lucas appear to have held the licence but the dates are conflicting.

Dolby was the last name to be recorded at the Hare and Hounds, and as we know that Joseph died in 1913, Mary, his wife, continued for a few years as Licensee, (could the picture show Mary standing at the door of the public house) but the 1920 Electoral Roll shows that she was no longer living in Woodnewton.  Information from an ancestor, who lives in Canada, tells us that she moved to live with one of her children on a farm near Northampton.

The 1922 Kelly’s Directory does not have a listing for the Hare and Hounds, so we must assume that after Mary left, the property reverted back to a place of residence.