The house now called Oliver’s Folly, is a Grade II listed building.  It is known to have been built during the early to mid 17th century and extended in the 18th/19th century. 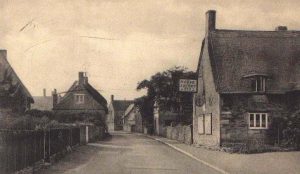 he first licensee was Thomas Hardy in 1847, continuing until 1870 when it was taken over by his son, John Thomas ( information from Kelly’s Trade Directories).  Joseph Dolby from Apethorpe appears to have taken over in 1885 when John Thomas became ill and then died  at a very young age of 41 years.   A newspaper article from January 1886, states that Joseph Dolby, the publican, was assaulted by two men who were fined 20s.  Joseph Dolby left the Horse and Jockey in 1894 and became the Landlord at the Hare and Hounds.

John Lindsey and his family moved from Folkingham, Lincolnshire, to become the next Licensee.  (Note surname used for the development that took place on some land belonging to the Brewery).  John did not run this Public House for very long as he died in 1904 at the age of 50 years.  His wife, Mary Ann, continued as Publican until the early 1920’s, as we know that Henry Hind appeared on the Electoral Roll in 1926.  The Horse and Jockey continued to trade with different Licensees over the following decades, but the pub fell into disrepair and a change of use order placed on it in 1967, when it was purchased by the current owners.