The first record of a victualler being recorded at this property was a Thomas Henson in 1790.  However, he only held the licence for just under 10 years as probate records show that he died in 1799.  Ann, his widow, followed in his footsteps until her death in 1807.  We know from Church records that the Henson family had obviously lived in Woodnewton for well over a hundred years as a Baptism in 1670 provides us with that information.

Two further publicans have been found between 1810 and 1828, when the well known Woodnewton family of the Barfields appeared on the scene.  Although the Barfield name is synonymous with Woodnewton over the last 180 years, the name actually dates back many centuries to the old county of Rutland.

Sarah, is the first Barfield name to appear as a victualler at the Swan, but who was she?  Samuel, arrived from 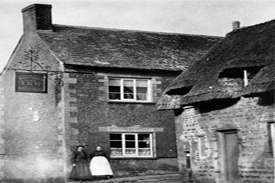 Kings Cliffe in 1826 with his young wife, Ann and their first child.  Life must have been hectic for Samuel and his family, as he had the wheelwright’s business (this was situated next door) to look after as well as the Inn.  Although, Samuel Barfield is recorded as a victualler in the records at Northampton Record Office, he died in 1849 and his wife Ann, is shown in the 1854 Kelly’s Directories as the next Licensee. Ann and Samuel junior, continue to run to run the Swan until 1861, when William Firmeadow took on the Licence. The Swan stayed in this family until the 1920’s.

Could the ladies in the picture be Eliza Firmeadow (now Licence holder) and her daughter Louisa Jane?

After 1920’s, the pub changed hands many times and as we see from this picture, the house alongside the Swan where Miss Burgess lived, was taken down, (date unknown but shown on 1968 Electoral Roll), and in the 90’s a 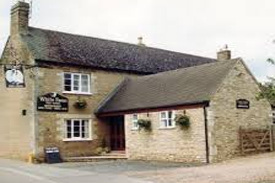 porch and toilet extension was built.

So from this research we know that this pub that was the first to open in Woodnewton is still up and running.