Now known as the Old Vicarage

The Vicarage, which is brick built, stands on the north side of Main Street (Town Street) opposite the church.  We know from the 1874 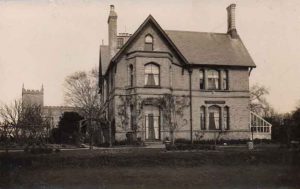 Kelly’s Directory that the Vicarage was built in 1871 at a cost of about £2000 (today’s figure would be £34,041.56).  The Ecclesiastical Commissioners gave £1400, but where the rest of the money came from is unknown.  At the time, there was very little money in the Parish, so did the balance come from the Westmorland Estate?

The Revered Henry Meux Roxby MA, was the parish priest at the time and we know from a newspaper announcement that his wife gave birth to a son at the Vicarage on 25th September 1871, so he was is residence by that time.  He left the parish in 1875 and Rev Henry Salmon Bagshaw was the resident of the Vicarage for the next 32 years until his retirement in 1907.  Four years after retiring, he died in Peterborough, and is buried in St Mary’s churchyard.

Bagshaw’s son,  Alfred, who himself was a baby when he came to Woodnewton, was the next vicar to take on the Living of the Parish.  He remained at the Vicarage for the next seven years.

It was during Alfred’s time at the Vicarage, on Tuesday, 30th December 1913, that the house caught fire.  Fortunately, the vicar and his family were not at

home at the time.  We know from newspaper reports that the house was completely destroyed but the contents were saved.  This was due to the fact that Kingscliffe and Apethorpe Fire Brigade were soon on the scene.  People who helped retrieve the contents were Leonard Brassey MP, and his sons Cecil and Gerald, and Brassey’s Agent, Gordon Wilson.  The damage was valued at £2000.  Mr Brassey, who was the patron of the benefice, had some years previously, spent £500 restoring the Vicarage.  The Vicarage was rebuilt during 1914 and the family moved back in.

One year later, in 1915, Henry left the Vicarage and moved  to the Parish church at Finedon.  The next incumbent, Rev Tayprell Clark was then resident with his wife, Georgina until 1918. The music in the church during his time of office must have been outstanding as he was classed as a skilled musician.

Over the next forty years, six priests were Incumbents of St Mary’s Parish Church and resided at the Vicarage.  In 1959 Basil Ward Turner left his previous Parish and moved to Woodnewton with his wife Pauline.  It was during his time as Vicar that the Vicarage was sold by the Ecclesiastical Commission and a new Vicarage was built on land to the west of the house in 1974.  Basil continued to live in the new Vicarage until his retirement in March 1986, when he left the area and moved to Suffolk.

Since the old Vicarage was first sold by the Ecclesiastical Commission, it has been occupied by several families and in 2014 a portion of land was sold off to the east of the house for a new property to be built.

The present residents have been in residence since 2016